Larry’s love for outdoor recreation and adventure began as a child.  He and his family spent their vacations exploring the southwest in their Ford Bronco.  When his daughter was born, he continued this tradition, but this time in a Jeep.  This passion later lead to competing in the (then) new sport of Rockcrawling where he won several national championships and a world championship.

He later turned his hobby into a business when he bought Poison Spyder Customs, a company that builds aftermarket parts for Jeeps.  As a way to test parts, PSC built several race Jeeps.  He went on to win two class championships in Ultra4 (Rock) Racing and has the honor of being the first modified class winner at King of the Hammers, the toughest single day off-road race.  He also has 4 Baja 1000 class wins.

He sold PSC to retire in beautiful South Western Utah.  After being retired for a few years he decided he needed a way to share his love of the outdoors and Jeeps with others and bought Zion Jeep Tours in 2018.  He now spends his days tinkering on the Jeeps and exploring the area looking for additional tour options. Cheri has worked in an office setting for 30+ years.  Even in high school as a stat girl for the wrestling team she was given the title of “Girl Friday” and was right there to lend a hand to coaches and anyone on the team that needed it.  This character trait continued into adulthood in the various business endeavors that she and her husband Larry embarked on through the years.  Together in Southern California they owned a construction business, a real estate brokerage and an aftermarket Jeep parts manufacturing facility.  They retired and moved to Southern Utah, but found they weren’t quite ready for that change and decided a Jeep Tour business would be a good fit for them.  Cheri runs the day to day function of the office and enjoys exploring the area either by Jeep or side x side.  Typically you won’t find the McRae’s Yellow Lab or Irish Doodle too far from them…they are certainly “dog” people.

Brendyce started her love for the outdoors growing up on Catalina Island, Ca. As a teenager she moved from an island in the pacific to an island in the desert of Northern Arizona, beautiful Page/Lake Powell, sprouting her true love of the expansive Southwest.

Brendyce attended Armstrong Atlantic State University in Savannah, Ga. After college she made her way back to the dry heat of the desert where she began working in Grand Canyon as a whitewater rafting guide.

Now residing in Southern Utah working at Zion Jeep Tours she enjoys getting out on the dirt, identifying new spring blooms, sharing the local history, and exploring the amazing geology of the red rock landscapes in and around Zion NP. In her free time she enjoys the great outdoors, long walks along the river, and delicious food… her appetite for adventure keeps her busy! 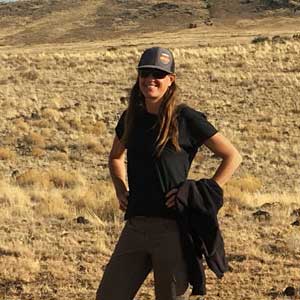 Sherri grew up spending her summers running free at her grandparents large ranch bordering Zion National Park. In 1994 Sherri moved to southern Utah full-time, quickly getting into long hikes, canyoneering, climbing and summiting the peaks in the park. She was hooked on exploring, not only the nooks and crannies of Zion, but the greater surrounding area in all that it has to offer.  Sherri has a keen interest in the areas’ Natural and Cultural Histories, by continually studying the archeology, geology, native plants and primitive living skills of the desert southwest.

Sherri’s love for exploring then expanded to sailing and the Caribbean, where she became a PADI Certified Rescue Diver and Professional Sailor.  After spending 5 years taking clients sailing, snorkeling, and scuba diving while delivering boats for others, she returned to southern Utah for a couple of years. During this time, Sherri met her future husband exploring the Colorado River and Grand Canyon via raft, and shortly thereafter moved to Colorado to start a family. Living 11 years there, she got her AIARE Pro 1 Avalanche and her NOLS Wilderness First Responder Certifications while living next to Rocky Mountain National Park, where she volunteered for Visitor and Resource Protection conducting Snow Surveys and Trail Patrols.

Most recently, Sherri returned home to the desert with her family in 2018 and now guides jeep tours and hikes, finding these avenues as the best way to experience and share her love and knowledge of the area with others. Andrew, a lifelong resident of Southern Utah, has spent many years exploring the back roads and trails of Zion and its vast area.  Andrew enjoys providing fun, educational tours and showing guests his secret spots away from the crowds.

A retired Police Officer and former military, he’s loving this next chapter of his life. Join Andrew and take the road less traveled. Melissa was born and raised here in Southwest Utah. She grew up recreating in the outdoors and has a passion for outdoor adventure. Melissa moved to Springdale and began guiding professionally in 2010. She loves to learn about plants, animals and geology and to share her knowledge with guests. She is currently finishing a bachelors degree in Digital Design at Dixie State University. In her free time Melissa enjoys making art, spending time with her two dogs and getting out on as many wilderness adventures as possible. 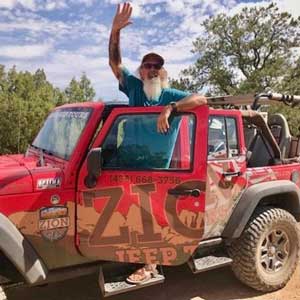 Kevin has lived in the area surrounding Zion for 20 years.  He believes everything about the desert is uniquely beautiful and endlessly fascinating.  When not out in a tour vehicle, you’ll find Kevin and his lovely dog enjoying the area both exploring and camping.  He also enjoys traveling beyond and gaining new perspectives.  But his real passion comes when sharing this majestic area with visitors. 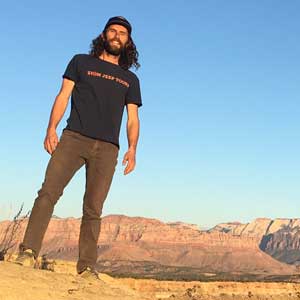 Born in Provo, Utah. Andy was raised by parents who have a major love for the greater outdoors. From long extended backpacking trips in the Sierras, to multi-day whitewater river trips on the Colorado Plateau, and mountain treks up the Grand Teton, these are some of his earliest memories that shaped his love for being out in the wilderness.

By the age of 10, he developed a deep rooted passion for rock climbing and has been at it ever since. With the encouragement from his parents and help of the local climbing gym, he quickly honed his skills in the art of climbing and was competing in national events by the age of 14. In his older teenage years, his interest in climbing evolved into the pursuit of establishing new climbing routes up walls that had never been climbed before. This lead to a great yearning to explore more of Utah’s many mountains and canyons in search of new cliffs to climb.

In the spring of 2015, he moved south to Springdale to begin a new chapter of his climbing career by becoming a professional guide for climbing and canyoneering around the Zion area. With a seemingly endless amount of vertical terrain to climb, he’s set his sights on both old and new routes on the magnificent sandstone walls of Zion. It’s no wonder why he feels this is the place to call home. Layney was born and raised in Southern California spending most of her time between the beach and the mountains. She came to Utah in 2016 on a solo backpacking trip and visited all 5 National Parks. Not only did she fall in love with the red rocks of Utah but also fell in love with her canyoneering guide!! They are now married and living the dream in the local town of Rockville. Layney has always had a love and passion for the outdoors and is an avid adventure seeker.  Whether it be hiking, biking, paddling, backpacking or rappelling into the narrow slot canyons of Utah, she’s always looking for her next big adventure. Originally from a small town south of Seattle, WA, Marianne grew up on a little farm enjoying riding her horses and camping with the family in the Cascade Mountains. She has had many careers over the years ranging from cleaning stalls, forklift operator, 911 dispatcher, real estate agent, coffee shop owner as well as marketing director at a flying club at Boeing Field. She finally settled on graphic design as her main choice of fields.

After attending the Art Institute of Seattle Marianne moved to Southern California where she had a variety of graphic design jobs to build her resume.  In 2015 Marianne began to foster her love of jeeps, a love she’s had since she was 12, and bought her own rock crawler jeep to build and explore the southern California jeep trails. Her love of the outdoors finally brought her to southern Utah where the desert lifestyle and outdoor activities gave Marianne just what she was looking for! A peaceful way of life in a beautiful landscape! Ben grew up in the Reno, Nevada area, where he gained a love for the outdoors with his family. Growing up, Ben was outside as much as possible, whether he was with family, friends, or having solo adventures. He enjoys just about every outdoor activity out there, mountain biking, hiking, camping, kayaking, climbing, etc. His favorite thing to do though is drive, on-road and off-road. He first learned to drive when he was 5 years old, off-road of course. Off-roading has been a lifetime passion and is something that he enjoys sharing with other people.
Ben is a jack-of-all-trades and has had many different jobs. He is currently a real estate agent, a photographer, and of course a tour guide at Zion Jeep Tours. He also volunteers with the local Search and Rescue teams and likes to work on project cars and motorcycles in his spare time. While he enjoyed most of his past jobs, his favorite job so far has been getting to drive off-road around one of the most beautiful places in the world and get to share that experience with others. Ben’s passion for the outdoors extends beyond the off-roading trails to all the amazing facts there are to learn about Zion and the surrounding area. He loves to share what he’s learned about the incredible geology, history, plants, animals, and everything else that makes south western Utah so special.
Toggle Sliding Bar Area